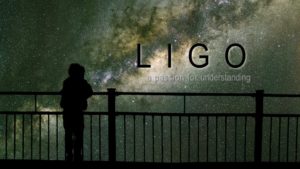 You can now get an inside look at the Laser Interferometer Gravitational-wave Observatory (LIGO) team and instrument with the, documentary, “LIGO — A Passion for Understanding“, released April 15th at space.com.  Watch the documentary to learn more about the instrument which uses two and a half mile-long laser beams to detect cataclysmic cosmic events which occurred trillions of miles from Earth. You will also learn about the LIGO Scientific Collaboration: a group of almost a thousand scientists from all across the globe seeking to make the first direct detection of gravitational waves.  As a part of that team, CIERA Director Vicky Kalogera, has built a gravitational-wave astrophysics group consisting of Postdoctoral Associate Tyson Littenberg, Graduate Student Ben Farr, and a team of undergraduate students. Together, they are developing develop cutting-edge methods to help us understand black holes from the complex data produced by LIGO.