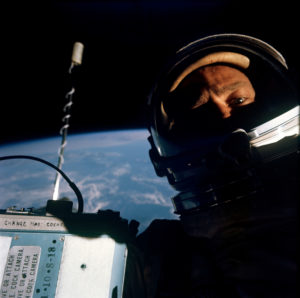 This week, Apollo 11 astronaut Buzz Aldrin revealed to CNN that he had one more first under his belt: he took the first ever space selfie. This photo of Aldrin was snapped on the Gemini XII mission in 1966, during a daytime break from taking photographs of nearby stars using an ultraviolet camera.
Aldrin leaves his story there, but there is much more to it. Aldrin is pictured next to the UV camera he was using, the brainchild of Northwestern professor and astronaut Karl Henize – meaning that Northwestern equipment shares Aldrin’s claim to the first ever space selfie.
Henize died in 1993 while climbing Mount Everest to test a NASA instrument, but not before he was able to make substantial contributions to the space instrumentation community. He was the principal investigator of the project that used a 70 mm Maurer camera to capture ultraviolet stellar spectra and shared in Aldrin’s photo.
Ultraviolet radiation is just one type of radiation absorbed and emitted by stars, similar to visible light; UV radiation is like a different range of colors that we can’t see. The ultraviolet camera on Gemini XII looked similar to a normal camera, but used a special UV lens and filter to filter out all radiation reaching the camera except UV rays. These UV rays were sent through a prism to create a spectrum (or wide range of wavelengths) of ultraviolet light readings.  The exact camera used on the mission is now in the Smithsonian National Air and Space Museum collections.
The spectrum generated by this camera can be used for a variety of different experiments. Because different elements in a star absorb UV radiation at slightly different intensities and wavelengths, the spectra generates a fingerprint of the chemical composition of that star. Henize used the readings from the Gemini missions to better understand the structure of nearby stars and nebulas.
Ultraviolet cameras used on the Gemini missions played an important role in both our understanding of stars and the career of an esteemed Northwestern professor. Of course, Buzz Aldrin probably wasn’t thinking about any of this when he shared the spotlight in the first ever space selfie with this important technology.