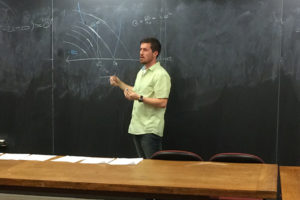 Sam Hadden has been awarded the NASA Earth and Space Science Fellowship for 2015-2016. Hadden has been a grad student at Northwestern for the past four years, working with CIERA faculty member Yoram Lithwick on exoplanets.

Hadden’s successful proposal is titled, “Accurate TTV Characterization of of Kepler planetary Systems, and Implications for Their Dynamics and Formation”. The aim of the research is to better characterize the masses and orbits of exoplanets discovered by the Kepler telescope and use these characterizations to investigate how the planets may have formed.