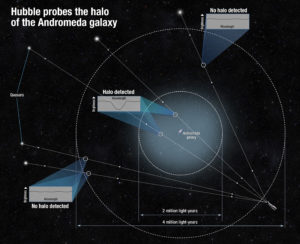 The research group of Claude-André Faucher-Giguère (GalForm @ NU) is part of a multi-institution team that has been awarded a large amount of time to use the Hubble Space Telescope to map the gas flows around the Andromeda galaxy. It will be the first time ever that they will be able to produce a spatially-resolved map of the gas around a galaxy other than the Milky Way. This work is very important because these gas flows regulate how galaxies grow.

The observations will be led by collaborators at the University of Notre Dame and the group at Northwestern will develop the theoretical tools needed for the interpretation of the Hubble observations. This ambitious project, called Project AMIGA (Absorption Maps In the Gas of Andromeda), will require an enormous 150 hours of Hubble Space Telescope time.

This new award of a large amount of time to use the Hubble Space Telescope builds on a recent pilot study led by the Notre Dame collaborators which has recently garnered much media attention. Find full story on Hubble Site Newscenter.