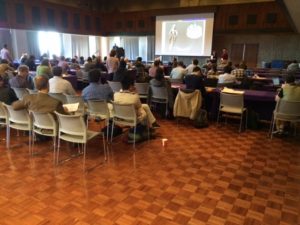 October 1 – 3, 2015, CIERA hosted the Midwest Relativity Meeting (MRM) with over 100 participants from across North America, including some of the leading experts in the country on the theory of relativity. The annual MRM aims to bring together researchers from across the Midwest and beyond to discuss general relativity and a broad range of topics in gravitational physics (classical and quantum gravity, numerical relativity, relativistic astrophysics, cosmology, gravitational waves, and experimental gravity).

CIERA hosted this meeting during the 100th anniversary of Einstein publishing the General Theory of Relativity; to celebrate the centennial anniversary, the traditional 2-day format of MRMs was extended to include a set of invited reviews and an evening public lecture by Dr. John D. Norton: Einstein’s Discovery of the General Theory of Relativity. 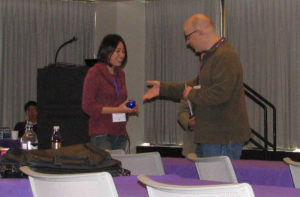 Each year, the Midwest Relativity Meeting includes a special award for best student talk. This year, the winner of the Blue Apple Award was Hsin-Yu Chen from the University of Chicago (advisor: Daniel Holz), with her talk: Optimizing Gravitational Wave Sources Follow-up Strategies.

The 26th MRM will be hosted next year by the Perimeter Institute for Theoretical Physics in Waterloo, Ontario.