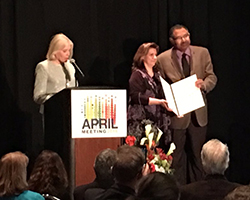 Dr. Vicky Kalogera, E.O. Haven Professor and Associate Chair, Department of Physics & Astronomy, has been awarded the 2016 Hans A. Bethe Prize from the American Physical Society (APS). The award recognizes outstanding work in theory, experiment or observation in the areas of astrophysics, nuclear physics, nuclear astrophysics or closely related fields. It is open to any scientist working in these areas, worldwide, and is presented annually by the APS divisions of astrophysics and nuclear physics. Dr. Kalogera will be honored with the Bethe prize at a recognition ceremony during the April, 2016 meeting of the APS.

The Bethe is the only astrophysics prize within the APS. Dr. Kalogera’s citation reads, “For key contributions to the study of the electromagnetic and gravitational wave radiation from binary compact objects, including the now-verified prediction that neutron star mergers produce short gamma-ray bursts that will be found in all galaxy types.”