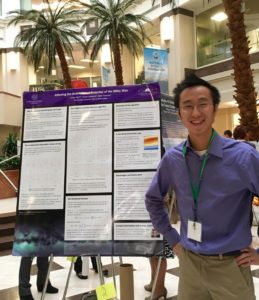 Casey Chu, an NSF REU student at CIERA during the 2015 summer, presented his summer research at a poster session for the Research Experiences for Undergraduates (REU) Symposium on October 25 & 26 in Arlington, Virginia.

The REU Symposium is held annually by the Council on Undergraduate Research, and invites a select group of the top students participating in REU programs from across the country to showcase their work from the previous summer. Casey was nominated by Aaron Geller (REU director and Co-PI) and Vicky Kalogera (PI) for his research this summer at CIERA with professor Yoram Lithwick and postdoctoral fellow Fabio Antonini.

At the symposium, Casey presented his poster titled, “Inferring the Gravitational Potential of the Milky Way,” to several NSF program administrators as well as other REU students from across the nation.