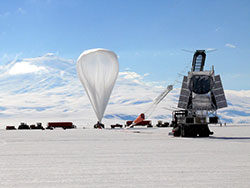 CIERA Postdoctoral Fellow Laura Fissel will be leaving Chicago for Virginia next year, as one of the National Radio Astronomy Observatory’s (NRAO’s) Jansky fellows. Jansky fellows are awarded to a handful of promising young researchers whose interests are aligned with that of the NRAO. As a Jansky fellow, Laura will continue her work with the BLAST (the Balloon-borne Large Aperture Submillimeter Telescope) project, a telescope that measures electromagnetic radiation in star-forming clouds of dust and gas.

At CIERA, Laura has been involved in both engineering the control systems for the BLAST telescope, as well as analyzing the data that the telescope has collected. Working on that project, Laura has become an expert in understanding magnetic fields that are involved in star formation, using the polarization of light as a key indicator of those magnetic fields. (Polarization is quality of light that our eyes cannot detect; in short, light can be thought of as a wave, and if you think of that light wave as a wave on a string, then the “polarization” just refers to whether the string is oscillating up and down or side to side. You make use of this each time you wear polarized sunglasses: light reflected from a flat surface is mostly light that oscillates in a particular way; your sunglasses block light that is polarized in one direction, cutting down the glare.)

While playing a key role in the BLAST mission, Laura is also interested in the new Atacama Large Millimeter/submillimeter Array (or ALMA) project, a group of radio telescopes located in Chile, which combines light from 66 radio dishes to produce high-quality images. ALMA promises a new look at star-forming regions. Significantly, the NRAO (in Charlottesville, Virginia) is the North American center for the ALMA project.

For Laura, having access to ALMA data as well as the BLAST data will give her an opportunity to study magnetic fields and clouds in star forming regions at both the small and large scale. BLAST is sensitive to magnetic fields in these star forming nurseries on many scales (both large and small), where as ALMA, with its amazing sensitivity and high resolution, can make incredibly detailed maps of even smaller regions, such as small clumps of gas and dust which will probably go on to form one stellar system. 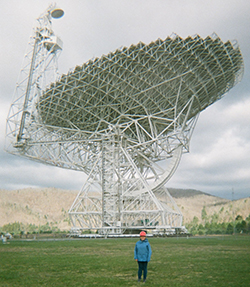 Though Laura will miss working closely with the CIERA group that is working on the BLAST project, she is excited for this next step. “Hopefully I’ll learn a lot and I’ll be able to work with some other people, and learn different techniques and get different ideas for studying star formation and magnetic fields in general.”

Giles Novak, CIERA-affiliated professor and a star formation researcher on the BLAST project, said that Laura’s expertise will be missed. “Laura’s contributions to the BLAST experiment have been tremendous – ranging from making split-second decisions in Antarctica during remote debugging of problems with our balloon-borne telescope, to patiently digging through our terabytes of data to find the signature of magnetic structure in star forming clouds,” he said. “I’m thrilled that she will be able to continue and expand her work on balloon-borne polarimetry after taking up her position as a Jansky Fellow at Charlottesville.”