CIERA Researcher Brings The Galaxy to the Classroom 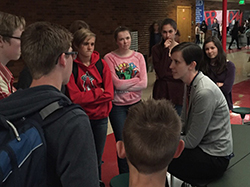 This spring at the Salt Lake Center for Science Education, Katie gave two talks to groups of students about astronomy. She spoke to a group of middle schoolers about modern astronomy and the electromagnetic spectrum, and spoke to high schoolers about gravitational waves. She also talked with an AP Physics class about what it’s like to be a graduate student in physics and astronomy.

This isn’t the first time Katie has brought her science skills to the classroom. The previous month, Katie helped the Science Olympiad team at Highland Middle School in Libertyville, IL. There, Katie worked with two groups of students to help prepare for events in Stellar Astrophysics and Wave Mechanics.

“I really like interacting with students because it gives me a chance to show them that scientists are people like them, just with a bit more school under our belts. It’s especially fun to interact with high school students because I can remember how I felt trying to figure out what I wanted to do with my life in high school. I had no idea what a grad student even did, or that there were jobs in astronomy anymore, so I love being able to be an example of ‘a real astrophysicist’ to the students I talk to,” Katie says.