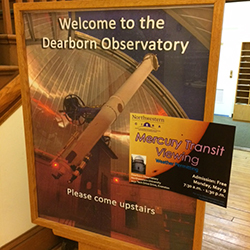 On May 9th, Dearborn Observatory welcomed visitors to view Mercury transiting the sun. Despite very cloudy conditions, over 40 people arrived throughout the morning. Kids had fun checking out the dome and telescope and talking with graduate students, who showed live-stream videos from other places in the world where the transit-viewing was clearer.

A transit is the passage of a planet across the Sun’s bright disk. When this happens, the planet can be seen as a small black dot slowly moving in an East-to-West direction in front of the Sun. The orbits of Mercury and Venus lie inside Earth’s orbit, so they are the only planets which can pass between Earth and Sun to produce a transit. It’s a relatively rare astronomical event. There are approximately 13 transits of Mercury each century. Let’s hope for clear skies next time: November 11, 2019.