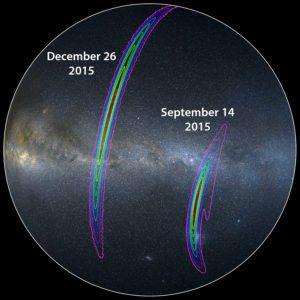 The new window onto the universe just opened a little bit wider. For the second time in history, an international team of scientists and engineers, including CIERA astrophysicists, has detected gravitational waves — ripples in the fabric of spacetime — and a pair of colliding black holes.

LIGO’s first detection of gravitational waves and merging black holes occurred Sept. 14, 2015 — an event that made headlines worldwide, confirming a major prediction of Albert Einstein’s 1915 general theory of relativity. The field of gravitational-wave astronomy was born with a little chirp “heard” on Earth that forever changed the way we see the universe.

The second detection occurred Dec. 26, 2015, and is known as the “Boxing Day event” (after the holiday celebrated in the U.K.). Read the full Northwestern News story.

CIERA director Vicky Kalogera, a member of the LIGO Scientific Collaboration (LSC), attended the American Astronomical Society meeting and was present at the media briefing where the news was announced. Dr. Kalogera leads Northwestern’s LSC group, which includes Shane L. Larson, research associate professor of physics and astronomy at Northwestern and an astronomer at the Adler Planetarium in Chicago, and Selim Shahriar, professor of electrical engineering and computer science at Northwestern’s McCormick School of Engineering.

View the recording of the American Astronomical Society press conference where this discovery was announced. Go to the AAS Press Conference Webcast Archive and click on “Latest News from the LIGO Scientific Collaboration” under the AAS 228 San Diego meeting (12-16 June 2016). At minute 32, when the Question & Answer section begins, Dr. Kalogera is cited as the expert on astrophysics.

June 16, 2016
WGN-AM: “What Does A Black Hole Sound Like? (Audio)” by Steve Grzanich.
NorthwesternU on Soundcloud: “Communication from Beyond a Cosmic Grave“.

June 23, 2016
The Monitor: “Why Gravitational Waves Matter” by Calla Cofield.

September 14, 2016
Business Insider: “A year ago, scientists cracked one of Einstein’s greatest mysteries — now a bizarre new form of astronomy is emerging” by Dave Mosher.