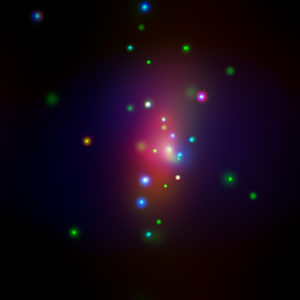 “We’re made of star stuff,” astronomer Carl Sagan famously said. Nuclear reactions that happened in ancient stars generated much of the material that makes up our bodies, our planet and our solar system. When stars explode in violent deaths called supernovae, those newly formed elements escape and spread out in the universe.

One supernova in particular is challenging astronomers’ models of how exploding stars distribute their elements. The supernova SN 2014C dramatically changed in appearance over the course of a year, apparently because it had thrown off a lot of material late in its life. This doesn’t fit into any recognized category of how a stellar explosion should happen. To explain it, scientists must reconsider established ideas about how massive stars live out their lives before exploding.

“This ‘chameleon supernova’ may represent a new mechanism of how massive stars deliver elements created in their cores to the rest of the universe,” said Raffaella Margutti, assistant professor of physics and astronomy at Northwestern University in Evanston, Illinois. Margutti led a study about supernova SN 2014C published this week in The Astrophysical Journal.

Please continue to the full NASA JPL Feature.
Visit the AAS Nova feature, “A Challenge to Our View of How Stars Die.”