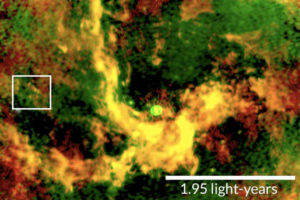 Ashley Yeager from ScienceNews.org writes, “Blobs of gas near the Milky Way’s center may be just the right mass to harbor young stars and possibly planets, too. Any such budding stellar systems would face an uphill battle, developing only about two light-years from the galaxy’s central supermassive black hole with its intense gravity and ultraviolet radiation. But it’s not impossible for the small stars to survive in the hostile place, a new study suggests.

‘Nature is very clever. It finds ways to work in extreme environments,’ says Farhad Yusef-Zadeh, an astrophysicist at Northwestern University in Evanston, Ill.”

Continue to the full Science News article.
Go to the paper at arXiv.org.
Read more about Prof. Yusef-Zadeh’s research.

Image: Clouds of gas (white box), observed with Atacama Large Millimeter/submillimeter Array (ALMA), appear to have the right mass to be young stars, even though they aren’t far from the supermassive black hole at the center of the Milky Way (green dot). Courtesy of F. Yusef-Zadeh/Northwestern University.