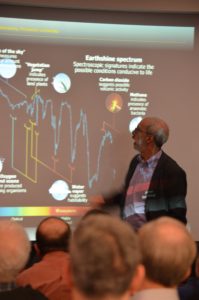 Professor Kasdin focused his talk on the increasing discoveries of exoplanets. He described techniques and advances in imaging exoplanets, an area that has benefited from a close partnership between engineering and astrophysics. He also shared his own career path, which has included roles both in industry and academia, and talked about supporting students interested in interdisciplinary areas of study.