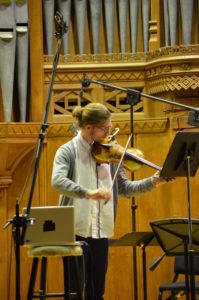 What does it sound like when you transform science into music? On May 22, an audience of about 75 enjoyed the premier of the Science Sonification Project Showcase in Lutkin Hall on Evanston’s campus. The event featured some of the finest composers from Northwestern’s Bienen School of Music, who teamed up with five scientists to create new music compositions inspired by cutting-edge scientific research. The result was a combined lecture-recital featuring science presentations, visualizations, and live performances of original music.

The Science Sonification and Composition Project is a new collaboration at Northwestern University that partners scientists with composers from the Bienen School of Music. The goal is to create and perform new music compositions inspired by cutting-edge scientific research at Northwestern. This collaboration was developed in 2016 by musician-scientists Eric Schwenker and Kyle Kremer as part of Kyle’s Cosmos in Concert initiative through Northwestern’s Center for Interdisciplinary Exploration and Research in Astrophysics (CIERA).