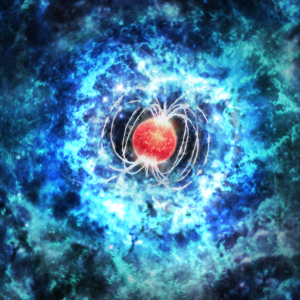 Northwestern has issued a press release, Astronomers discover ‘heavy metal’ supernova rocking out: First clear evidence of a metal-rich birthplace for a superluminous supernova, which begins:

“Many rock stars don’t like to play by the rules, and a cosmic one is no exception. A team of astronomers, including Northwestern University’s Raffaella Margutti, has discovered that an extraordinarily bright supernova occurred in a surprising location. This “heavy metal” supernova discovery challenges current ideas of how and where such super-charged supernovas occur.

Supernovas are some of the most energetic events in the universe. When a massive star runs out of fuel, it can collapse onto itself and create a spectacular explosion that briefly outshines an entire galaxy, dispersing vital elements into space.

In the past decade, astronomers have discovered about 50 supernovas, out of the thousands known, that are particularly powerful. These explosions are up to 100 times brighter than other supernovas caused by the collapse of a massive star.”

Please continue to the full Northwestern News Feature.
Read the paper, “The superluminous supernova SN 2017egm in the nearby galaxy NGC 3191: a metal-rich environment can support a typical SLSN evolution” in The Astrophysical Journal Letters.
“‘Heavy metal’ sheds light on super-charged supernovas” on Futurity.