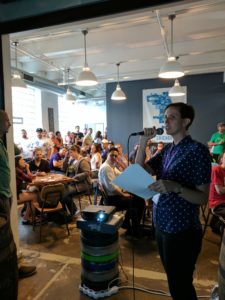 In anticipation of the 2017 total solar eclipse, Astronomy on Tap Chicago hosted 100 astronomy and beer-loving friends at Begyle Brewing at an event called “Solar Eclipse of the Heart” on August 14. Astronomy on Tap is a series of informal gatherings at area bars and restaurants where audiences hear scientific talks, receive updates on the latest astronomy news, and play rounds of space-themed trivia with prizes. CIERA graduate students and postdocs organize the events, which are free and open to the public.

At Begyle Brewing, graduate student Cody Dirks and postdoctoral fellow Aaron Geller each gave eclipse-related talks. Cody helped the audience understand and prepare for the 2017 eclipse, while Aaron talked about the fate of our sun in the distant future. The Astronomy on Tap team gave out 100 pairs of CIERA eclipse safe-viewing glasses.

Stay tuned to Astronomy on Tap’s Facebook and Twitter for upcoming events and talk topics (trivia hints, too!). Check out the Chicago Tribune article featuring quotes from Cody Dirks about the eclipse and Astronomy on Tap.