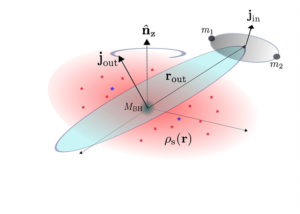 The first direct observation of merging black holes by Advanced LIGO opened a new window to our Universe. The new set of data from these detectors will provide important clues about the properties and formation of neutron stars and black holes and about the environment in which they form. But a better understanding of the processes that lead to the merger of black holes is needed in order to make sense of the large data set anticipated in the coming years.

Massive stars are very social: they are often found accompanied by one or more close friends. It is not surprising therefore that the evolution of massive binary stars in the outskirts of galaxies has been suggested as the main channel for the formation of the merging black holes observed by LIGO. Massive stars are also commonly found at the center of galaxies, including the Milky Way, and dynamical processes in such environments could also cause black holes to merge.

Unlike the stellar binaries in the field, the binaries in the galactic center feel strong gravitational perturbations from their neighboring stars and the super massive black holes sitting at the center. CIERA postdoctoral fellow Fabio Antonini and his colleague at the Canadian Institute for Theoretical Astrophysics, Cristobal Petrovich, have modeled the dynamics of these binaries and realized that massive stars will quite often undergo a chaotic dance that ends with a merger by gravitational wave radiation. Surprisingly, this chaotic dance is effective enough that it can explain a significant fraction of the LIGO observations. This suggests that the galactic nuclei are privileged places in the galaxies for stellar mass black holes to merge.