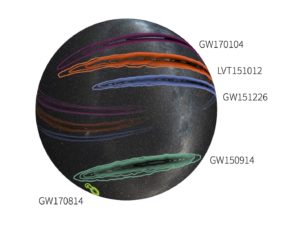 The LIGO Scientific Collaboration (LSC) and the Virgo collaboration announced today (Sept. 27) the first joint detection, made on August 14, of gravitational waves with both LIGO and Virgo detectors. It is the fourth announced detection of a binary black hole system and the first significant gravitational-wave signal recorded by the Virgo detector, located near Pisa, Italy.

“This discovery is the first one made with three detectors — two in the U.S. and a third across the ocean in Italy. As such, it is especially significant. This first-ever triple detection allows us to localize where the event occurred, so our research partners in observational astronomy can more accurately scan the sky to look for electromagnetic counterparts. This type of multi-messenger information will be key for solving the great cosmic puzzles. All pieces are needed,” says CIERA’s Director, Professor Vicky Kalogera.

Shane Larson, CIERA’s Associate Director, explains, “Gravitational wave astronomy isn’t like telescope astronomy. We’ve always known that our ability to map sources on the sky will get better as more detectors join the network, and Virgo has shown us what a difference it makes with a bang!”

LIGO is funded by the NSF, and operated by Caltech and MIT, which conceived and built the project. Financial support for the Advanced LIGO project was led by NSF with Germany (Max Planck Society), the U.K. (Science and Technology Facilities Council) and Australia (Australian Research Council) making significant commitments and contributions to the project. More than 1,200 scientists from around the world participate in the effort through the LIGO Scientific Collaboration, which includes the GEO Collaboration. Additional partners are listed at http://ligo.org/partners.php. The Virgo collaboration consists of more than 280 physicists and engineers belonging to 20 different European research groups: six from Centre National de la Recherche Scientifique (CNRS) in France; eight from the Istituto Nazionale di Fisica Nucleare (INFN) in Italy; two in The Netherlands with Nikhef; the MTA Wigner RCP in Hungary; the POLGRAW group in Poland; Spain with the University of Valencia; and EGO, the laboratory hosting the Virgo detector near Pisa in Italy.