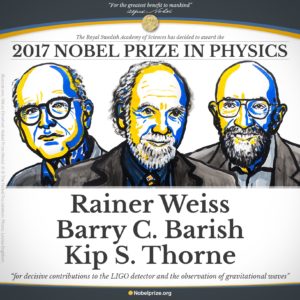 Gravitational waves, ripples in the fabric of spacetime, were first predicted by Albert Einstein in 1916 and are a new way of observing the universe. The Laser Interferometer Gravitational-Wave Observatory (LIGO) Scientific Collaboration has detected gravitational waves four times – first, on Sept. 14, 2015, and most recently, on Aug. 14, 2017. All four signals detected so far were created by colliding black holes.

Moving forward, astronomers are working on methods for combining gravitational wave data and electromagnetic data to study cosmic sources. The National Science Foundation named this new technique, called multi-messenger astronomy, one of the top six ideas to pursue in the future. Multi-messenger astronomy holds the answers to untold astronomical questions, including how the universe was formed.

“Rai, Kip and Barry launched the LIGO project decades ago and worked very hard to confirm Einstein’s theory,” said Kalogera, the Linzer Distinguished University Professor in Physics and Astronomy in the Weinberg College of Arts and Sciences. “I am so proud to have had the opportunity to learn from them since my years as a young researcher. Rai and Kip especially were influential in my decision to join the LIGO Scientific Collaboration at a time when most ‘traditional’ astronomers were advising me against it. I have grown through their advice and support and will always be grateful for what they have achieved for science and the younger generation of scientists.”

A Ligo Scientific Collaboration (LSC) member for more than 15 years, Kalogera is LSC’s most senior astrophysicist. She leads Northwestern’s LSC group, which includes Shane L. Larson, CIERA associate director and a research associate professor of physics and astronomy at Northwestern, and Selim Shahriar, professor of electrical engineering and computer science at Northwestern’s McCormick School of Engineering. Larson and Shahriar also have been mentored over the years by Weiss or Thorne. Eleven postdoctoral fellows and graduate and undergraduate students also are members of the Northwestern group.


Learn more about the first gravitational-wave detections and Northwestern’s role in the discoveries: