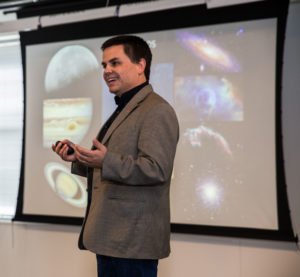 CIERA Associate Director and Research Professor Shane Larson has been named to the NASA LISA Study Team. LISA, the “Laser Interferometer Space Antenna,” is a space-based detector that will be jointly flown by NASA and the European Space Agency near the end of the next decade.

The NASA LISA Study Team was established by NASA HQ in October 2017 to assist the U.S. community in preparing for the 2020 astrophysics Decadal Survey and provide input to the Study Office and NASA HQ on the LISA mission. It consists of independent U.S. scientists with expertise in gravitational wave technologies, signal analysis, and astrophysics.