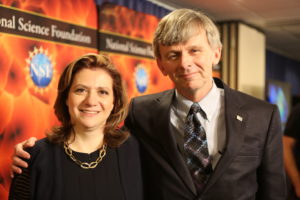 On October 16, 2017, scientists announced the first-ever observation of a binary neutron star inspiral and merger—this astronomical event will provide a powerful new way to understand the lives of stars and how they die and join the galactic graveyard.

Vicky Kalogera, CIERA Director and Daniel I. Linzer Distinguished University Professor in the Weinberg College of Arts and Sciences, served as lead astrophysicist on the panel at the National Science Foundation’s (NSF) press conference announcing the discovery.

Anticipated by the Laser Interferometer Gravitational-Wave Observatory (LIGO) for more than 20 years, this merger represents the first joint detection of an astronomical event using two astronomical observing techniques: gravitational waves and electromagnetic radiation. Together these approaches are known as “multi-messenger astronomy”. Gravitational waves were the subject of 2017’s Nobel Prize in Physics, and multi-messenger astronomy was named one of the NSF’s 10 Big Ideas for future scientific investment. Northwestern is currently one of the few universities in the world with expertise on both sides of this cutting-edge field.

ROUNDUP OF MEDIA MENTIONS OF CIERA/NORTHWESTERN
These collected news stories contain quotes and interviews from various CIERA/Northwestern researchers involved in the multi-messenger detection.