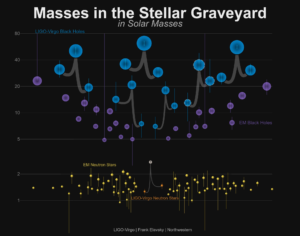 At 11:00pm on June 7, 2017, Eve Chase was preparing for a final exam when she received an email that LIGO, the tandem observatories set to listen for gravitational waves emitted by cosmic events, had detected yet another binary black hole merger. Since that moment, Eve, a second-year doctoral student at Northwestern, devoted her efforts to studying the event, becoming the youngest person in the over 1,000 world-wide LIGO-Virgo collaboration of scientists to lead the analysis (called “parameter estimation”) of one of LIGO’s chirps.

LIGO heard GW170608 during its second observation run, “O2”. Parameter estimation tasks were split for O2, meaning that researchers, including Eve and other LIGO team members at Northwestern, volunteered to be on call for 2-week intervals during the run and take the lead on the analysis of any signals detected during their period. When Eve volunteered, she was assigned a date range and paired with Patricia Schmidt, a postdoctoral researcher from Radboud University, the Netherlands. On June 8th, Eve stayed up until 2:00am, focusing on the new signal she just learned of, until Dr. Schmidt awoke on the other side of the world. Eve and Dr. Schmidt have talked every day since then, and the world over, they are the experts on this event.

Eve and Dr. Schmidt were significant contributors to the new paper by the LIGO and Virgo collaborations describing GW170608. Eve wrote an email to notify the electromagnetic partner scientists (including those at Northwestern) about GW170608. Over the past few months, Eve has presented during world-wide teleconferences to help researchers understand this binary black hole merger. 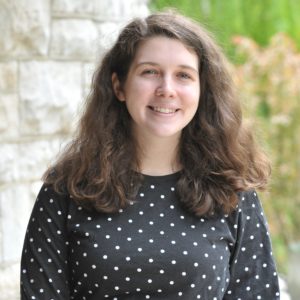 GW170608 was detected by LIGO Livingston. LIGO Hanford had just come back online after a couple of weeks’ work to improve its mirrors. Hanford heard the signal, too, but the mirror testing produced a lot of noise. (Virgo, the third gravitational wave observatory on Earth, had not yet joined the O2 observing run, and was not part of this analysis.) LIGO scientists have become better at understanding and mitigating noise, bringing us closer to the underlying astrophysical message of the event. Adding to the population of binary black hole systems available for study will let Eve and her colleagues begin to understand how these systems form. This particular system has the lowest mass of the known population and it contains black holes at masses comparable to those found in low-mass X-ray binaries.

Eve will be presenting a talk about GW170608 at the January 2018 meeting of the American Astronomical Society.