The complete team of researchers standing in front of BLAST-TNG. 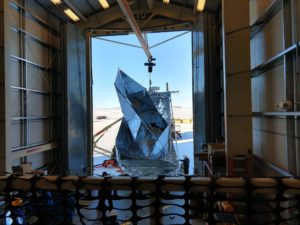 A crane maneuvers the telescope outside of the facilities.

Astronomer Paul Williams was one of 15 researchers who embarked on a two month long trip to a volcanic island in Antarctica this last winter. The team planned to launch the Balloon-borne Large Aperture Submillimeter Telescope – The Next Generation (BLAST-TNG), nearly 25 miles in the air to study the conditions of star formation.

Williams is a PhD student in the Department of Physics and Astronomy at Northwestern working on astronomical instrumentation for BLAST-TNG, a telescope funded by NASA and NSF to study both star formation and measure foregrounds for cosmology.

Theoretically, around 100 stars are expected to form in the Milky Way

every year, but according to Williams, if you count how many are forming, you get about one.

“There’s obviously something that’s stopping [the formation of stars], but it’s still unclear if it’s the magnetic fields or some other process happening.” 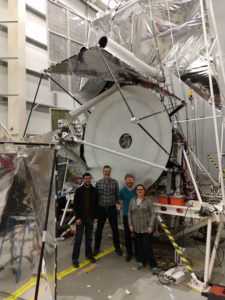 Star-forming regions are made of clouds of gas and dust. Currently, we are unable to see beyond the surface of dust pillars, and are subsequently missing images and data on the earliest phases of star formation. Recently, the magnetic fields within these regions are being explored for their possible impact on star formation.

“The [magnetic fields] act like rubber bands, and support the structure of these clouds. To move, the clouds have to stretch the magnetic field, which takes energy – as stretching a rubber band does,” said Williams. “The magnetic fields can affect how the gas moves around, which affects how many stars form.”

The light emitted by the clouds observed is not visible light, and has a wavelength of about 250 – 500 microns. By measuring the polarization of light coming from dust in the Galaxy, it will be able to constrain the role of magnetic fields in star and planet formation, as well as characterize the polarization foregrounds for studies of the cosmic microwave background.

“These dust grains are a micron in size. A micron is a millionth of a meter, and is 100x smaller than your hair. These tiny grains wind up in the magnetic field and the light they emit can give us information.”

The problem with the light emitted by these clouds is that it doesn’t make it through the atmosphere to where it could easily be studied because of the water in the atmosphere.

BLAST-TNG collects data from a height that avoids more than 99 percent of the water in the atmosphere at a much lower cost than a satellite. For the cost of one satellite, hundreds of balloon expeditions could be funded. 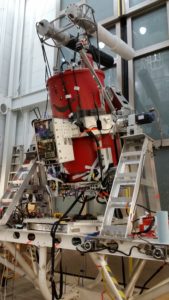 The cryo chamber for the telescope.

The BLAST-TNG telescope was shipped to Antarctica and assembled over the course of a month. Researchers planned to rotate on scheduled shifts through every hour of the day to monitor the football field sized balloon while it scans the sky top to bottom in a zig-zag to collect data.

While all of us in the Northern Hempisphere are in winter, Antarctica is experiencing summer. For the researchers, this means 24 hours of daylight and the infamous polar vortex; odd conditions to live in, yet optimal for the research project for the solar-powered, free-floating balloon.

“It just floats, we can’t control where it goes. The winds push the balloon, so in terms of its trajectory, we can’t control that at all. That’s why we go to Antarctica,” said Williams. “When [the polar vortex] is doing its job and just going in a circle, it’s nice because we release the balloon and it more or less stays over the continent.”

In Antarctica, the weather can change extremely quickly, and a general unpredictable nature combined with poor forecasts can lead to sudden dangerous conditions.

“Everyday there was a possibility that we wouldn’t even be able to go out there and do work. The weather can be so bad that you just can’t go outside, even with all the gear they give you.”

The team of researchers attempted to launch the telescope four different days, but the weather was not adequate and NASA sent an advisory against the launch.

“The telescope is huge and covered in sheets of aluminized mylar – it really catches the wind. So, if there’s any amount of wind, you can’t launch,” said Williams. We had four days of not quite good enough weather, and then it was just getting too late in the season. The polar vortex we rely on doesn’t last all summer, and it was starting to break apart.”

After knocking out one trip to Antarctica, Williams is hopeful for his second alongside the team next year in November. The telescope will have already been assembled, so the high stress moments will come later as they hope for and work toward a successful launch, according to Williams.

Perhaps Antarctica will be a nice getaway from an icy Chicago winter next year.