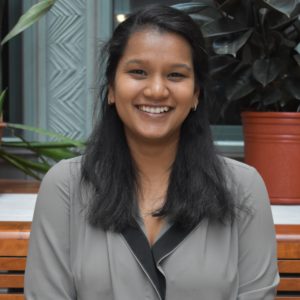 CIERA graduate student Aprajita Hajela will be part of the inaugural cohort of young researchers, with her successful proposal titled “Exploring and Investigating Time-Domain Multi-Messenger Astronomy across the Electromagnetic Spectrum and Beyond.” The Astrophysics Division received 188 proposals and selected 21 for award.

Aprajita did her undergraduate work in India and explained that there are very few opportunities for international students to seek external support for their research. Because she cannot apply to every opportunity that her peers can, Aprajita was “super excited and honored” to receive this award. She looks forward to working toward her goals with the support she will receive from NASA over the next three years. She is eager to travel to conferences, and she will gain back many hours of productive work each week by not having to take a teaching assistantship, all thanks to this award.

Aprajita works in multi-messenger astronomy, studying the mergers of black holes and neutron stars. Binary mergers of these amazing objects produce “messages” in the form of gravitational waves and emissions across the electromagnetic spectrum. Aprajita’s main research questions include understanding the mysterious nature of the merger’s remnant, and whether all binary neutron star mergers launch fast-moving jets of material that are violently swept out from the merger.

Aprajita’s advisor, assistant professor Raffaella Margutti, describes the award as “a fantastic result that comes after months of hectic work by Aprajita. She chased after gravitational wave sources and transients, while writing papers and successful proposals like this one. I am excited for Aprajita’s future achievements which will be enabled by this award.”