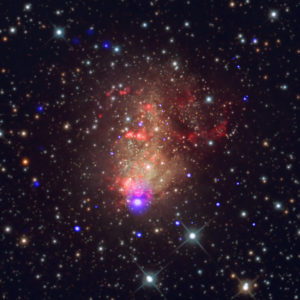 Astronomers have predicted how to look inside stars using gravitational waves, allowing researchers to determine the structure of stars using this new method of probing stars and next-generation instruments.

Gravitational wave sources are ideal for measuring inside stars; they interact very weakly with matter, making it possible for them to travel freely through the dense hearts of stars. The star’s gravity alters the path the wave takes, enabling researchers to map out its internal structure. This type of astronomical measurement is impossible with light.

Detecting this effect of gravitational waves passing through stars provides a new direct probe to the interior of stars, complementing asteroseismology and the detection of solar neutrinos. These measurements could unlock new secrets about the inner workings of stars.

The best gravitational waves for this purpose are continuous waves emitted by rotating neutron stars. As these signals are always on, it is possible to measure changes in them as a star passes between the source and the Earth.

The researchers collaborated internationally on this project. The team was composed of CIERA members Pablo Marchant, Christopher Berry, and Shane Larson, as well as former CIERA researchers Katie Breivik (now at CITA, Canada) and Ilya Mandel (now at Monash University, Australia). Their findings were published in the paper Eclipses of continuous gravitational waves as a probe of stellar structure in Physical Review D.