This Exoplanet is in a Death Dance with its Star 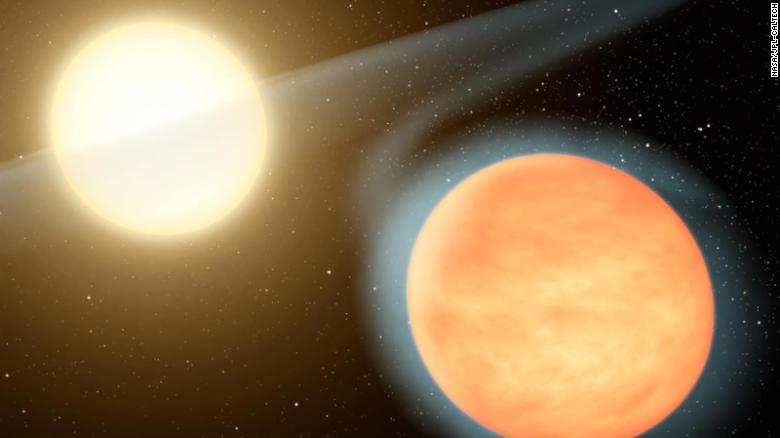 An illustration of WASP-12b as it spirals in a death dance towards its star. The planet will meet its end in three million years. (CNN)

Planets tend to suffer the consequences as the stars they orbit go through different phases. And in about three million years, the exoplanet known as WASP-12b will cease to exist.

The gas giant exoplanet and the star it orbits are about 600 light-years from Earth in the Auriga constellation. The planet is so close to its star it completes one orbit around every 26 hours. And this orbit has sent WASP-12b on a spiraling death dance towards the star.

A study of the star and planet published last month in the Astrophysical Journal Letters.

The exoplanet is considered a “hot Jupiter,” a class of exoplanets that are similar in size to gas giants like Jupiter, except they have blazing hot temperatures.

“Ever since the discovery of the first ‘hot Jupiter’ in 1995 — a discovery that was recognized with this year’s Nobel Prize in Physics — we have wondered how long such planets can survive,” said Joshua Winn, study co-author and a professor of astrophysical sciences at Princeton University.

Continue to the full article at CNN.com, “This Exoplanet is in a Death Dance with its Star” by Ashley Strickland.

View the paper, “The Orbit of WASP-12b Is Decaying” on The Astrophysical Journal Letters.