Banner image: The surrounding environment of SGRB 161104A, which includes a galaxy cluster. Image taken by the Magellan Telescopes. Nugent et al. 2020 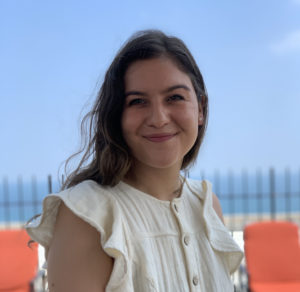 A team of Northwestern researchers discovered a short gamma-ray burst called SGRB 161104A in a location where it is rare to find them – within a galaxy cluster. Very distant and faint, finding SGRB 161104A helped the team learn about its unusual home using state-of-the-art techniques.

Galaxy clusters are the largest gravitationally-bound objects in the Universe and host the oldest stars in the universe. CIERA graduate student Anya Nugent said that SGRB 161104A is “quite a significant discovery,” because finding an SGRB in a galaxy cluster implies that its progenitor must be very old compared to the rest of the population of SGRBs. Because clusters are such a rare place to find a short gamma-ray burst, the team was able to place limits on the correlation of SGRBs to galaxy clusters in general.

The research group also modeled the galaxy where SGRB 161104A exploded. Modeling the home galaxy of SGRB 161104A helped the team understand stellar population properties, such as mass and age, and compare that to the properties of twenty other SGRB host galaxies to learn more about the progenitors of SGRBs.

Astronomers believe SGRBs happen when two neutron stars combine in an explosion, creating a brief burst of gamma rays, the most energetic form of light.

Nugent, who is advised by Professor Wen-fai Fong, says that this project is the first one she began as a graduate student at Northwestern, and that the paper has been in the works for two years.

Congratulations Anya and the Fong team!

Read more in the new paper, The Distant, Galaxy Cluster Environment of the Short GRB 161104A at z ~ 0.8 and a Comparison to the Short GRB Host Population.