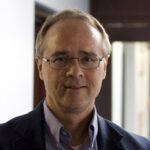 On April 23, 2021 to an audience of nearly 65, James Kasting presented a CIERA Interdisciplinary Colloquium, “The Search for Life on Planets Around Other Stars.”

Hosted by Fred Rasio and introduced by Sukrit Ranjan, Professor Kasting is the Evan Pugh Professor from the Department of Geosciences at Pennsylvania State University.

The event was jointly presented by CIERA and the Departments of Physics & Astronomy and Earth & Planetary Sciences.

Planets have now been found around several thousand stars. Some of these are thought to be rocky, and a handful of those lie within the habitable zone of their parent star, where liquid water is stable on the planet’s surface. About one year from now, NASA’s James Webb Space Telescope should launch, and it may be able to do spectroscopy on transiting rocky planets around nearby M stars. Likely targets include several of the planets in the TRAPPIST-1 system. The best opportunity to study Earth-like planets will come 15-20 years later, however, if NASA chooses to build one of its proposed direct imaging space telescopes, currently called LUVOIR and HabEx. These telescopes are competing with two other large space telescopes, Origins and Lynx, for endorsement by the ongoing Astronomy & Astrophysics Decadal Survey. With such a telescope, one could identify and characterize non-transiting planets around the very nearest stars. This could provide information not only about other Earth-like planets, but also about the existence, or non-existence, of extraterrestrial life.