CIERA Postdoctoral Associate Erin Cox has been awarded a National Science Foundation Mathematical and Physical Sciences Ascending (MPS-Ascend ) Postdoctoral Fellowship!  The fellowship will provide $100,000 per year for up to three years to support Cox’s research into the formation of stars and planets as well as her work with Northwestern’s Prison Education Program (NPEP).  The goal of MPS-Ascend is to support outstanding future scientists who will broaden the participation of underrepresented minorities as future leaders in MPS fields, as well as to facilitate their transition from postdoctoral researchers into a faculty appointment.  MPS-Ascend was offered for the first time in 2021, when it funded just a total of 33 recipients across all of Chemistry, Materials Research, Mathematics, Physics, and Astronomy. 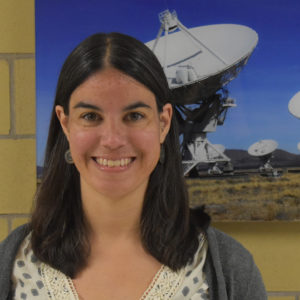 Cox says, “I’m very excited to be selected for this award because it will give me the chance to study stellar birth using large, powerful radio facilities just now coming online, as well as allowing me to pursue a deeper involvement with the amazing NPEP organization.”

Cox seeks to uncover the influence of Galactic magnetism on the birth of stars and planets.  Her observations take advantage of the steadily improving polarimetric capabilities of the Atacama Large Millimeter-Submillimeter Array (ALMA) in Chile.  ALMA is the most expensive astronomical facility on Earth.  Also, for her new research enabled by the MPS-Ascend award, Cox will use the 50-meter Large Millimeter Telescope (LMT) in Mexico, the world’s largest millimeter telescope. The new LMT polarimeter TolTEC is now undergoing commissioning tests.

When asked what led her to pursue this fellowship, Cox said “when I noticed the announcement of this new fellowship just in its second year of existence, I was already incredibly excited about both LMT and NPEP, and I couldn’t believe my good fortune in being given a shot at bolstering both of my interests with a single proposal.”

Cox’s new study will trace the shape of the magnetic field surrounding young (baby) binary stars, using both LMT and ALMA polarimetry.  Most stars form with at least one stellar companion, and currently there are two leading thoughts on how binary stars form– (1) fragmentation of the protostellar envelope and (2) gravitational instabilities in the protostellar disk– with both likely occurring at some level.  By mapping the ambient magnetic field surrounding a statistical sample of baby twin stars, Cox will probe the dynamical processes involved in their formation.  She hopes to establish the first magnetic signature of binary formation pathway.  For the broader impacts component of her fellowship, Cox will develop and teach a new NPEP class, expanding on her earlier work as a class facilitator.

“I’d like to thank my mentors for helping me to get to this point in my career,” Cox said. “Specifically, my mentor Giles Novak here at Northwestern and my graduate school advisor Leslie Looney. Additionally, I’d like to thank my friends and family who supported me during stressful times.”

Cox adds “TolTEC is an instrument that people in my research group have been working on for years and I’m thrilled to finally be able to exploit its excellent synergies with ALMA — combining data from the two facilities will yield exquisite new maps of young, stellar nurseries.”
Congratulations Erin!