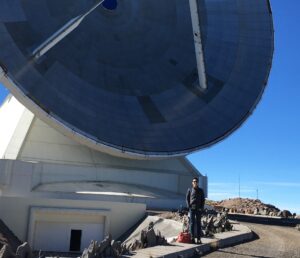 Lee plans to use the Large Millimeter Telescope (Gran Telescopio Milimétrico) to continue his research on magnetic fields in stellar nurseries. Image is from Dennis’ trip to LMT in November 2021.

NASA’s Stratospheric Observatory For Infrared Astronomy (SOFIA) Science Center is responsible for reducing data from SOFIA’s instruments and delivering science ready data products to the astronomical community. Each year the center chooses to highlight about a dozen papers reporting SOFIA science results. Dennis’ 2021 paper in the Astrophysical Journal was the 5th to be chosen by the center for highlighting in 2022.

Dennis carried out a joint analysis of magnetic field maps made using HAWC+/SOFIA, which samples the field on the scales of molecular cloud cores, and corresponding maps from European Space Agency’s Planck mission, which map the field on larger spatial scales. The target chosen for the study was the Lynds 1688 stellar nursery in Ophiuchus. Using the Histogram of Relative Orientations technique, developed by Colombian astrophysicist Juan Soler of the Istituto Nazionale di Astrofisica in Rome, Italy, Dennis was able to estimate the gas density at which the cloud’s energy budget switches from magnetically-dominated to gravitationally-dominated. This “transition density” is generally a poorly known quantity, but it is needed to characterize the influence of the magnetic field on the efficiency and other characteristics of the star formation process.

Dennis works with Professor Giles Novak on instrumentation and observational research aimed at uncovering the role of magnetism in star/planet formation. He is a member of both the instrument and science teams for TolTEC, a new camera/polarimeter for the world’s largest millimeter wavelength telescope (the LMT in Mexico). In addition, he is pursuing a program of observations and archival data research that exploits the rich trove of magnetic field data obtained over the past five years using the far-infrared polarimeter HAWC+ that operates on SOFIA.

Dennis is also active in sharing his enthusiasm for scholarship with others. He serves as a peer mentor for first-year graduate students, is a member of the Chicago branch of Astronomy on Tap, and participates in CIERA’s Astronomer Evenings program.