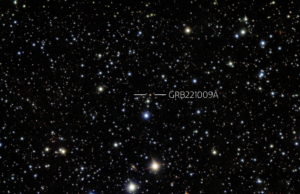 Affectionately referred to as the B.O.A.T. (“brightest of all time”), the powerful explosion occurred approximately 2.4 billion light-years away from Earth, in the direction of the constellation Sagitta. Astrophysicists first detected the GRB, which was a few hundred seconds in duration, in gamma-ray light on Oct. 9.

In the early morning hours of Friday, Oct. 14, Northwestern’s Jillian Rastinejad used the Gemini Multi-Object Spectrograph, mounted on the Gemini-South telescope in Chile, to study the evolving event (dubbed GRB221009A) and its resulting afterglow in optical light. At the same time, a graduate student at George Washington University also observed GRB221009A with a near-infrared imaging spectrograph.

Now — eight days after the event occurred — the teams hypothesize that the record-breaking burst was generated by a massive star collapsing and giving birth to a black hole. More analysis is needed, however, to confirm the GRB’s origins and determine what caused this particular GRB to emit so much energy.

“This GRB is an extraordinarily rare event,” said Rastinejad, a Northwestern Ph.D. student. “It was so bright that it triggered the Swift gamma-ray telescopes twice and fully saturated the detectors — something I haven’t seen in my time observing GRBs.”

“As long as we have been able to detect GRBs, there is no question that this GRB is the brightest that we have ever witnessed by a factor of 10 or more,” said Northwestern astrophysicist Wen-fai Fong, who advises Rastinejad. “Because the GRB is so bright, we expect to be able to monitor it for several months. It’s currently in its infancy, and we are learning more with each new passing observation. Unfortunately, we only have about a month or so before it goes behind the sun. But when it comes out of solar conjunction early next year, we will be excited to see the GRB as a messy ‘toddler.’ Then, we will be ready and waiting to capture it on camera.”

Fong is an assistant professor of physics and astronomy in Northwestern’s Weinberg College of Arts and Sciences and a key member of the Center for Interdisciplinary Exploration and Research in Astrophysics (CIERA). Rastinejad is a Ph.D. student in CIERA and member of Fong’s research group.