What makes gamma-ray bursts blink on and off?

The most energetic events in the universe have a strange habit of going silent mid-blast, stumping astrophysicists. But new simulations suggest a surprising answer. 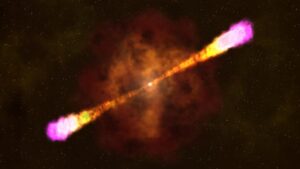 When a massive star collapses into a black hole, jets generated by the black hole during the collapse can power a gamma-ray burst.
Credit: NASA’s Goddard Space Flight Center

The birth of a gamma-ray burst (GRB) is a stellar event. These incredibly violent blasts are the most energetic explosions in the universe. In just one second, a GRB can release more energy than our Sun has emitted over the course of its entire lifetime to date. GRBs also have a deadly reputation; they may have even played a role in one of Earth’s largest mass extinctions.

But for events so intense they can be seen across the universe, GRBs are difficult to study. This difficulty is further compounded by the environments in which researchers think they are born, which typically contain dense star-forming regions nearby. But new research published June 29 in The Astrophysical Journal Letters, produces the highest-resolution 3D GRB simulations to date and is a major step forward in understanding these mysterious blasts and why they act the way they do.

How to make a gamma-ray burst

GRBs come in two flavors: long and short. Long GRBs, those lasting anywhere from a second to several minutes, are released from so-called collapsars, when a quickly rotating massive star goes supernova and collapses into a black hole, ejecting jets of material along the way. These jets are what power the GRB.

Ore Gottlieb, a CIERA Fellow at Northwestern University in Evanston, Illinois, has made a career out of studying these high-energy astrophysical phenomena. “I’ve always been curious about stellar explosions,” he tells Astronomy. But beyond the explosions, Gottlieb hopes to learn more about the stars themselves. In particular, he wants to “understand how and why different stars explode in different ways.”

He had previously studied the jets emitted by collapsars by looking at the interactions between the GRB jets and the surrounding stellar material as the star is in the process of collapsing. His work used hydrodynamic simulations to model the interactions between the two. But “one thing that was always missing is: How do you start or launch the jet in the first place?” he says.

Probing the heart of the star itself required integrating relativistic physics into the already complex simulations. It was a daunting prospect.

Continue to the full Astronomy.com story.