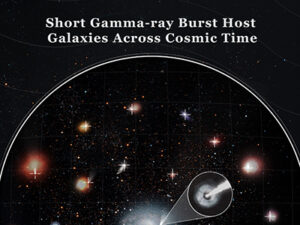 A Northwestern University-led team of astronomers has developed the most extensive inventory to date of the galaxies where short gamma-ray bursts (SGRBs) originate.

Using several highly sensitive instruments and sophisticated galaxy modeling, the researchers pinpointed the galactic homes of 84 SGRBs and probed the characteristics of 69 of the identified host galaxies. Among their findings, they discovered that about 85% of the studied SGRBs come from young, actively star-forming galaxies.

The astronomers also found that more SGRBs occurred at earlier times, when the universe was much younger — and with greater distances from their host galaxies’ centers — than previously known. Surprisingly, several SGRBs were spotted far outside their host galaxies — as if they were “kicked out,” a finding that raises questions as to how they were able to travel so far away.

“This is the largest catalog of SGRB host galaxies to ever exist, so we expect it to be the gold standard for many years to come,” said Anya Nugent, a Northwestern graduate student who led the study focused on modeling host galaxies. “Building this catalog and finally having enough host galaxies to see patterns and draw significant conclusions is exactly what the field needed to push our understanding of these fantastic events and what happens to stars after they die.”

The team published two papers, detailing the new catalog, today (Nov. 21) in The Astrophysical Journal. Because SGRBs are among the brightest explosions in the universe, the team calls its catalog BRIGHT (Broadband Repository for Investigating Gamma-ray burst Host Traits). All of BRIGHT’s data and modeling products are publicly available online for community use.

Nugent is a graduate student in physics and astronomy at Northwestern’s Weinberg College of Arts and Sciences and a member of the Center for Interdisciplinary Exploration and Research in Astrophysics (CIERA). She is advised by Wen-fai Fong, an assistant professor of physics and astronomy at Weinberg and a key member of CIERA, who led a second study focused on SGRB host observations.