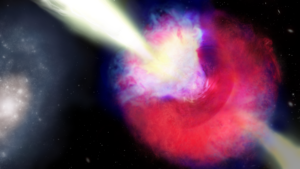 Artist’s impression of GRB 211211A. The kilonova and gamma-ray burst is on the right. The blue color represents material squeezed along the poles, while the red colors indicate material ejected by the two inspiralling neutron stars that is now swirling around the merged object. A disk of ejecta emitted after the merger, hidden behind the red and blue ejecta, is shown in purple. A fast jet (shown in yellow) of material punches through the kilonova cloud. The event occurred about 8 kiloparsecs from its host galaxy (left). Credit: Aaron M. Geller/Northwestern/CIERA and IT Research Computing Services.

For nearly two decades, astrophysicists have believed that long gamma-ray bursts (GRBs) resulted solely from the collapse of massive stars. Now, a new study upends that long-established and long-accepted belief.

Led by Northwestern University, a team of astrophysicists has uncovered new evidence that at least some long GRBs can result from neutron star mergers, which were previously believed to produce only short GRBs.

After detecting a 50-second-long GRB in December 2021, the team began searching for the long GRB’s afterglow, an incredibly luminous and fast-fading burst of light that often precedes a supernova. But, instead, they uncovered evidence of a kilonova, a rare event that only occurs after the merger of a neutron star with another compact object (either another neutron star or a black hole).

In addition to challenging long-established beliefs about how long GRBs are formed, the new discovery also leads to new insights into the mysterious formation of the heaviest elements in the universe.

The research was published today (Dec. 7) in the journal Nature.

“This event looks unlike anything else we have seen before from a long gamma-ray burst,” said Northwestern’s Jillian Rastinejad, who led the study. “Its gamma rays resemble those of bursts produced by the collapse of massive stars. Given that all other confirmed neutron star mergers we have observed have been accompanied by bursts lasting less than two seconds, we had every reason to expect this 50-second GRB was created by the collapse of a massive star. This event represents an exciting paradigm shift for gamma-ray burst astronomy.”

“When we followed this long gamma-ray burst, we expected it would lead to evidence of a massive star collapse,” said Northwestern’s Wen-fai Fong, a senior author on the study. “Instead, what we found was very different. When I entered the field 15 years ago, it was set in stone that long gamma-ray bursts come from massive star collapses. This unexpected finding not only represents a major shift in our understanding, but also excitingly opens up a new window for discovery.”

Fong is an assistant professor of physics and astronomy in Northwestern’s Weinberg College of Arts and Sciences and a key member of the Center for Interdisciplinary Exploration and Research in Astrophysics (CIERA). Rastinejad, a Ph.D. student in astronomy and member of Fong’s research group, is the paper’s first author.