From November 19 – 20, Northwestern University hosted the 2022 Physics REU Site Directors Workshop. Originally planned to take place right as COVID hit, this meeting has been anticipated for 2 years, with the previous in-person meeting taking place in 2016 with the intention of meeting in person every 3 years. In attendance were about 60 physics and astronomy REU site directors and PIs, as well as the physics and astronomy REU NSF program directors and a number of invited speakers and panelists, including Northwestern’s Bennett Goldberg, who led a session on “Recruiting, training, supporting & rewarding mentors” on Saturday.

The broad goals of the meeting were to bring together this community to discuss strategies and best practices for supporting our REU students and to identify collaborative efforts that we can pursue as a community. Furthermore, another goal was to bring together the physics and astronomy site directors (typically two distinct groups) to discuss shared goals and possibilities for connecting our two communities.

Aaron Geller was the initial PI of the NSF grant that funded this meeting. At the time that the meeting was proposed, Geller was the Chair of the physics REU leadership group (the executive committee of the NPRLG). Geller is also an active participant in the astronomy REU directors group. He has worked throughout the years to bring these groups together. For this meeting, he was involved throughout the entire process, from planning sessions to local logistics to running the meeting (with help of the other organizers). 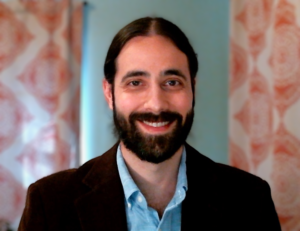 “I was lucky to have a great REU experience when I was an undergraduate student, and that was a transformative experience for me. Because of this, I strive to enable other students to have similar research opportunities as I had.  This is why I’ve been the PI of CIERA’s REU program since its inception in 2015. In 2016/7, I became involved in the leadership group for the physics REU site directors in order to help build and strengthen our community.

Having everyone together in the same place, after all this time of meeting only on Zoom (due to the pandemic), was very impactful. I reconnected with many friends and colleagues, learned more about the current state of equity and inclusion in physics and how to support a diverse group of students in REUs, and made plans to continue working with this community on joint initiatives, for instance, to assess the efficacy of physics REU programs for student success.” – Aaron Geller

The meeting is made possible with support from the NSF and the American Physical Society. Thank you also to Kari Frank, who was a tremendous help with the local organizing! For those who are interested in applying to the REU program’s 2023 student cohort, applications (including all supporting documents) are due February 1, 2023.