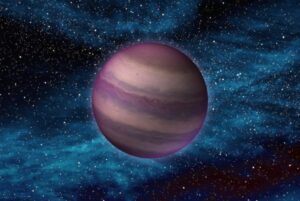 The researchers say that by studying similar star systems, we can learn more about potentially habitable planets beyond Earth. Ultracool dwarfs are much fainter and dimmer than the sun, so any worlds with liquid water on their surfaces — a crucial ingredient to form and sustain life — would need to be much closer to the star. Credit: NASA/JPL Caltech image

The two stars are so close that it takes them less than one Earth day to revolve around each other. In other words, each star’s “year” lasts just 20.5 hours.

The newly discovered system, named LP 413-53AB, is composed of a pair of ultracool dwarfs, a class of very low-mass stars that are so cool that they emit their light primarily in the infrared, making them completely invisible to the human eye. They are nonetheless one of the most common types of stars in the universe.

Previously, astronomers had only detected three short-period ultracool dwarf binary systems, all of which are relatively young — up to 40 million years old. LP 413-53AB is estimated to be billions of years old — similar age to our sun — but has an orbital period that is at least three times shorter than the all ultracool dwarf binaries discovered so far.

“It’s exciting to discover such an extreme system,” said Chih-Chun “Dino” Hsu, a Northwestern astrophysicist who led the study. “In principle, we knew these systems should exist, but no such systems had been identified yet.”

Hsu presented this research during a press briefing at the 241st Meeting of the American Astronomical Society in Seattle. “Discovery of the shortest-period ultracool dwarf binary” took place today (Jan. 10), as part of a session on “Stars and Their Activity.” Members of the media can register here.

Hsu is a postdoctoral researcher in Northwestern’s Center for Interdisciplinary Exploration and Research in Astrophysics (CIERA). He began this study while a Ph.D. student at UC San Diego, where he was advised by Professor Adam Burgasser.