CIERA Researchers Highlight Their Expertise in Seven Minutes or Less 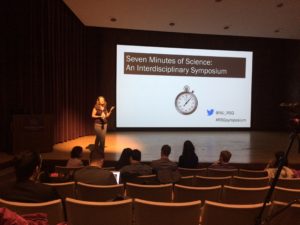 On March 16, 2017, CIERA graduate students Paul Williams and Michael Zevin showcased their skills in public speaking at the bi-annual event: “Seven Minutes of Science.” Seven Minutes of Science is the culmination of 10-weeks of practice and coaching, where the individuals present on their complex research to a general audience within a seven-minute time frame. In the past, the course has been offered exclusively to NU graduate students and postdoctoral researchers, but this quarter it was also opened to faculty for the first time.

The event is organized by the RSG program, in association with CIERA’s new data science program, Integrated Data-Driven Discovery in Earth and Astrophysical Science (IDEAS). A shared goal of both programs is to increase awareness for the need of excellent science communicators, and to coach researchers to improve their presentation skills.

This year, fourteen speakers discussed their research in a broad range of scientific topics—from creating simulations that will assist in heart valve surgery, to investigating the Earth’s crust near the Great Lakes in order to better understand how new earth is formed on the ocean floor.

Paul and Michael represented CIERA by speaking on their astrophysical investigations. Paul’s presentation was titled Balloons Above Antarctica: The Coolest Place to Put a Telescope, and discussed his work with Next Generation Balloon-borne Large Aperture Submillimeter Telescope (BLAST) currently being constructed in Antarctica.

Michael’s talk was called Revealing the Lives of Stars Through the Cataclysmic Collisions of Black Holes, and focused on his role within CIERA’s Laser Interferometer Gravitational Wave Observatory (LIGO) group, and the unknown unknowns that will define the course of future research in gravitational waves. Associate Neda Rohani (EECS) also presented on her work with LIGO affiliated project, Gravity Spy.