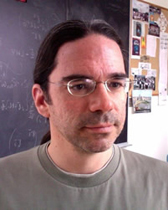 Congratulations André de Gouvêa for his selection as 2020 fellow of the American Association for the Advancement of Science (AAAS). de Gouvêa has been recognized for many years as a world expert on the physics of neutrinos and on theories for physics beyond the standard model of particles physics.

de Gouvêa is also known for the quality of his teaching and mentoring of young particle theorists, and for the past few years he has been the Director of Northwestern’s Integrated Science Program. He came to Northwestern in 2003, obtained tenure in 2009, and has been a full professor since 2014.

de Gouvêa is among six Northwestern faculty members selected for this honor by AAAS, the largest general scientific society in the world. They will be recognized virtually in February in an induction ceremony for new fellows.