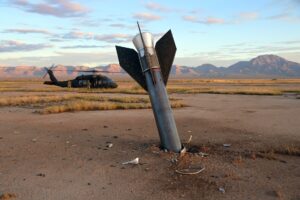 The rocket spent 15 minutes in space — just enough time to snap a quick image of supernova remnant Cassiopeia A, a star in the Cassiopeia constellation that exploded approximately 11,000 light-years away from Earth.

Then, the rocket parachuted back to Earth, landing in the desert — about 45 miles from the launchpad — where the researchers helicoptered in to recover the payload.

“During the countdown, we were on pins and needles,” said Enectali Figueroa-Feliciano, the researcher who leads the project, in an interview with ABC-7 Chicago. “Then we saw in our monitors the detectors seeing the photons from Cas A. People just went wild. People started screaming and jumping up and down. It was mayhem.”

By studying the supernova remnant, which is 10 light-years across, Figueroa-Feliciano and his students hope to learn more about life on Earth — and inside our bodies.

“We’re all made of star stuff,” he said. “The elements in our bodies are made in the cores of stars.”