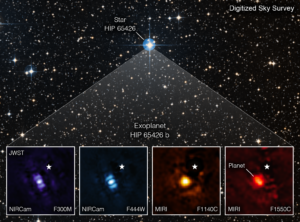 For the first time, a team of astronomers — including Northwestern University’s Jason Wang — used NASA’s James Webb Space Telescope to take a direct image of a planet outside our solar system. The exoplanet is a gas giant, meaning it has no rocky surface and could not be habitable.

The image, as seen through four different light filters, shows how Webb’s powerful infrared gaze can easily capture worlds beyond our solar system, pointing the way to future observations that will reveal more information than ever  about exoplanets.

The exoplanet in Webb’s image, called HIP 65426 b, is about 6 to 12 times the mass of Jupiter, and these observations could help narrow that down even further. It is young as planets go — about 15 to 20 million years old, compared to our 4.5-billion-year-old Earth.

“It was so exciting to help produce the Webb’s first image of an exoplanet,” Wang said. “Exoplanets have never been directly imaged at some of these wavelengths before, so it has been an exciting and fun month figuring out how to analyze the data and reveal this faint planet hiding underneath the glare of its bright host star. The image quality was better than we expected, and I’m really excited about using Webb images like these to understand atmospheric physics and what these planets are made of. It was also really great to work together with experts from all around the world to make this image. We were all focused on imaging this exoplanet with Webb, and it’s a great feeling to see everything work.”

Wang is an assistant professor of physics and astronomy in Northwestern’s Weinberg College of Arts and Sciences and a member of the Center for Interdisciplinary Exploration and Research in Astrophysics (CIERA). He was part of the Webb team that designed the data pipeline used to reveal the exoplanet hidden behind the glare of its host star.