From October 18 – 21, Northwestern University hosted team meetings for the Zwicky Transient Facility (ZTF) and SEDMv2. Given the close relationship between these two projects, the meetings were held back to back. While the teams did discuss past successes, the primary purpose of these meetings was to plan for and execute future discoveries. 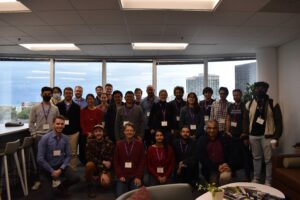 This was the first-ever SEDMv2 collaboration meeting, providing an overview of everything related to SEDMv2, including the construction of the instrument, its installation on the Kitt Peak 84-inch telescope, commissioning, and plans for executing future observations. The SEDMv2 meeting was open to members of the SEDMv2 consortium, resulting in 29 in-person participants! The SEDMv2 team meeting summarized the current status of the instrument and its successful installation on Kitt Peak. Team members also collaborated to identify mutually beneficial science between the different SEDM partners. 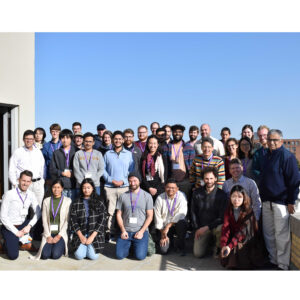 The ZTF team meeting focused on recent results from within the collaboration and provided an avenue for an extended discussion about what the collaboration would like to do for the final ~12 months of the survey, developing a strategy that will produce the highest impact results from the last ~12 months of ZTF-II operations. Participation in the first two days of the meeting was limited to ZTF collaboration members, with 39 in-person participants. The final day of the ZTF meeting was open via invitation from the organizers and to ZTF collaboration members, with 50 in-person participants, focusing on a discussion of “Time-domain astronomy with small aperture telescopes in the Rubin era.”

“It was wonderful hosting the SEDMv2 and ZTF teams. SEDMv2 is going to do a lot of great science that will benefit many students, postdocs, and faculty at CIERA; and the ZTF team has a lot of exciting plans for searching for gravitational wave counterparts during LIGO’s upcoming O4 run. The ZTF team is also considering some new modes for surveying the sky which could lead to very exciting results.” –Adam Miller, chair of the Science Organizing Committee (SOC) and Local Organizing Committee (LOC) for both meetings.

Thank you to Kari Frank, William Vercellone, Billy Samano, and Alexandra Lenox for their work on the local organizing committee, and thank you to the SEDMv2 and ZTF teams for a wonderful meeting! A number of CIERA members participated as well, including Chang Liu and Nabeel Rehemtulla, CIERA graduate students, who were able to share results from their work at the meeting.