One of just two finalists, team receives $3 million from NASA to refine its proposed mission 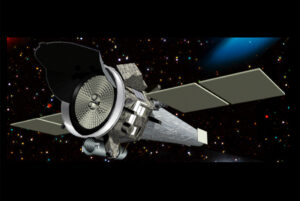 Artist’s impression of STAR-X after its proposed launch in 2028. The aperature of the X-ray telescope is the large circular shape toward the left. The ultraviolet telescope is the outrigger tube attached to the facility’s underside. Credit: The STAR-X team and NASA/GSFC

NASA has selected STAR-X, a space mission proposed to the agency’s Explorer program that includes Northwestern University astrophysicists Vicky Kalogera, Wen-Fai Fong and Charlie Kilpatrick, as one of two finalists to launch a research facility into space in 2028.

As a finalist, the STAR-X team received $3 million to fund a nine-month-long detailed exploration of the proposed mission. If selected to launch into space, the STAR-X team will receive up to $300 million in additional funding. NASA will select one project as soon as 2024 to proceed with implementation.

Short for “Survey and Time-domain Astrophysical Research eXplorer,” the STAR-X project will use an X-ray telescope, an ultraviolet telescope and a responsive spacecraft to conduct time-domain surveys, which examine how astronomical objects change over time. The instruments also will respond rapidly to transient cosmic events, such as supernova explosions and compact-object mergers, discovered by Earth-based observatories. In other words, they will be able to pivot quickly to observe fast-fading cosmic sources before they disappear from view.

“It was a thrill to receive the news that NASA selected STAR-X as one of just two missions to reach this stage of development,” said Kalogera, a senior consultant on the project. “The team has optimized STAR-X for discovery of X-ray and ultraviolet signals that are bright only for a short time but carry a lot of information about the exotic objects that produce them.”

“Currently, we have X-ray facilities with small fields of view that can rapidly respond to transient events, Fong said. “STAR-X has the perfect combination of fast reaction time, wide field-of-view and high resolution. This is truly revolutionary in space-based astronomy, and STAR-X will open an entirely new way for us to interact with the high-energy universe.”

Kalogera is the Daniel I. Linzer Distinguished Professor of Physics and Astronomy in Northwestern’s Weinberg College of Arts and Sciences and director of the Center for Interdisciplinary Exploration and Research in Astrophysics (CIERA). Fong is an assistant professor of physics and astronomy in Weinberg and member of CIERA. Kilpatrick is a CIERA postdoctoral fellow. The STAR-X mission is led by William Zhang, an astrophysicist at NASA’s Goddard Space Flight Center in Greenbelt, Maryland.