Eighteen-year-old Madeline Oh, a research student working with Vicky Kalogera and co-advised with former CIERA Fellow Maya Fishbach and current graduate student Chase Kimball, has been selected as one of the top 300 scholars in the Regeneron Science Talent Search 2023. Chosen from an applicant pool of 1,949 high school students, the Regeneron Science Talent Search (STS) selects promising young scientists who are developing ideas that could solve society’s most urgent challenges. 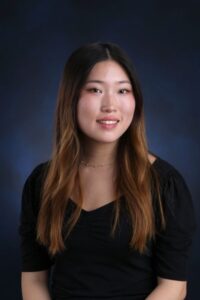 In Madeline’s research, she studied the ways in which asymmetric compact binaries form and merge. “I used a code called COSMIC to simulate the large populations of stars evolving into binary black holes and neutron star–black hole binaries under varying initial conditions,” said Madeline. “I identified five main evolutionary pathways that lead to binary black holes and neutron star–black hole binaries, and found that the majority of asymmetric systems follow one of these pathways in particular. Then, in order for the system to merge, the secondary object needs to receive a large kick in the right direction during its supernova so that the two components are not too far apart.”

“In 2019, the LIGO and Virgo gravitational wave detectors observed a gravitational wave signal that came from a large black hole merging with what was either the smallest black hole or the largest neutron star ever detected. Either way, this was the first time that a merging binary of black holes or neutron stars was detected with such an extreme mass ratio. Since then, more of these mergers have been observed and are often called “asymmetric compact binary mergers.” Because these asymmetric systems are such a new discovery, there is still a lot about them that remains unknown,” said Madeline.

Started in 1942 as the Westinghouse Science Talent Search, the Regeneron STS, a program of Society for Science, is the nation’s oldest and most prestigious science and math research competition for high school seniors. Each year, leading experts judge nearly 2,000 submissions of original research in critically important scientific fields of study. The chosen top 300 scholars are awarded $2,000 each and their schools are awarded $2,000 for each enrolled scholar to support STEM-related activities.