An international team of scientists including CIERA Professor Jason Wang have used the European Space Agency’s (ESA) Gaia satellite to detect a new exoplanet undergoing nuclear fusion. Led by Professor Sasha Hinkley from the University of Exeter, the team believes this is the first planet that Gaia has assisted in the discovery of.

“This is the first time where we have confirmed that we discovered a new planet by measuring the star’s position so precisely that we see it wobble due to a hidden planet orbiting it,” said Jason Wang. 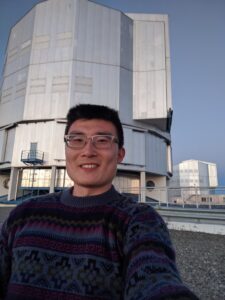 Jason at the VLT in Antofagasta, Chile

The planet, HD206893c, was found 750 trillion miles from Earth using the subtle movements of its star, HD206893. It orbits 300 million miles from its host star and has a mass greater than that of Jupiter. Researchers pinpointed its location using the optical interferometry of the Very Large Telescope’s (VLT) four main telescopes operating as one.

“Using precise measurements from both the Gaia and Hipparcos space missions that have measured precise positions of stars for the last couple of decades, we could point our instruments at where we thought a planet should be next to the star and indeed directly see the planet, confirming it is real. I did the orbital analysis here to compute where to point our instruments so we can directly see the planet,” continued Jason.

“The discovery provides concrete evidence that modern instruments are able to directly​ detect exoplanets on orbital scales that are similar to our own solar system,” expanded the University of Exeter in their own press release.

While the discovery of the planet was monumental on its own, the fact that it was found to be undergoing nuclear fusion has been equally exciting.

“We discovered a planet that is temporarily undergoing nuclear fusion, a process that typically separates planets from brown dwarfs and stars. Some models for how planets evolve have predicted that a very massive planet can go through a temporary nuclear burning phase as the planet cools and contracts. This is the first time we’ve seen it. The planet really pushes the limit of when a planet transitions to a brown dwarf (which all burn Deuterium). A skeptic might think what we detected is actually a more massive brown dwarf, but I did the orbital analysis to weigh the planet and show that the mass of the object puts it into the planetary regime. This is crucial to confirm we are seeing a planet with temporary nuclear fusion,” said Jason.

University of Exeter team expanded:  “Th[e] technique [used by the research team] allows [the VLT’s] GRAVITY [instrument] to measure the position of the planet in its orbit extremely precisely, as well as measure the spectrum of light being emitted from the planet’s atmosphere – further allowing astrophysicists to characterize its atmosphere. The research team has used this technique to conclude that the newly-discovered planet clearly shows obvious ‘brightening’ –  due to it undergoing nuclear fusion by burning Deuterium, or “heavy Hydrogen” in its core.”

Lead investigator Professor Sasha Hinkley presented the discovery of HD206893c at the 241st meeting of the American Astronomical Society on January 10, 2023.