Exploring the wonders that lie beyond our planet requires a beautifully collaborative effort; a creative process undertaken by communities of passionate astronomers. For this reason, the Aspen Center for Physics is dedicated to creating a serene space in Aspen, Colorado, for astrophysicists to come together and explore new research in an engaging way.

CIERA helped organize the 2022 Aspen Winter Conference on Astrophysics at the Aspen Center for Physics from January 2-7, bringing 59 astrophysicists together from across the country and globe, with 12 participants from CIERA. This year, the conference focused on the dynamical formation of gravitational wave sources, with gravitational wave astrophysics presently being one of the most active research areas at CIERA. Indeed, CIERA is home to several groups that study gravitational waves and their sources, and the conference provided them an opportunity to discuss their projects and get the perspective of fellow participants, as well as to hear about the latest work being done by their colleagues around the world.

CIERA graduate student Elena Gonzalez has focused her research on black hole formation in dense star clusters. “I am glad that I attended because I was able to meet collaborators that I had only communicated with via email. Also, as a first-year graduate student, it was interesting to meet and talk to the authors of critical papers that I had based my research on.” 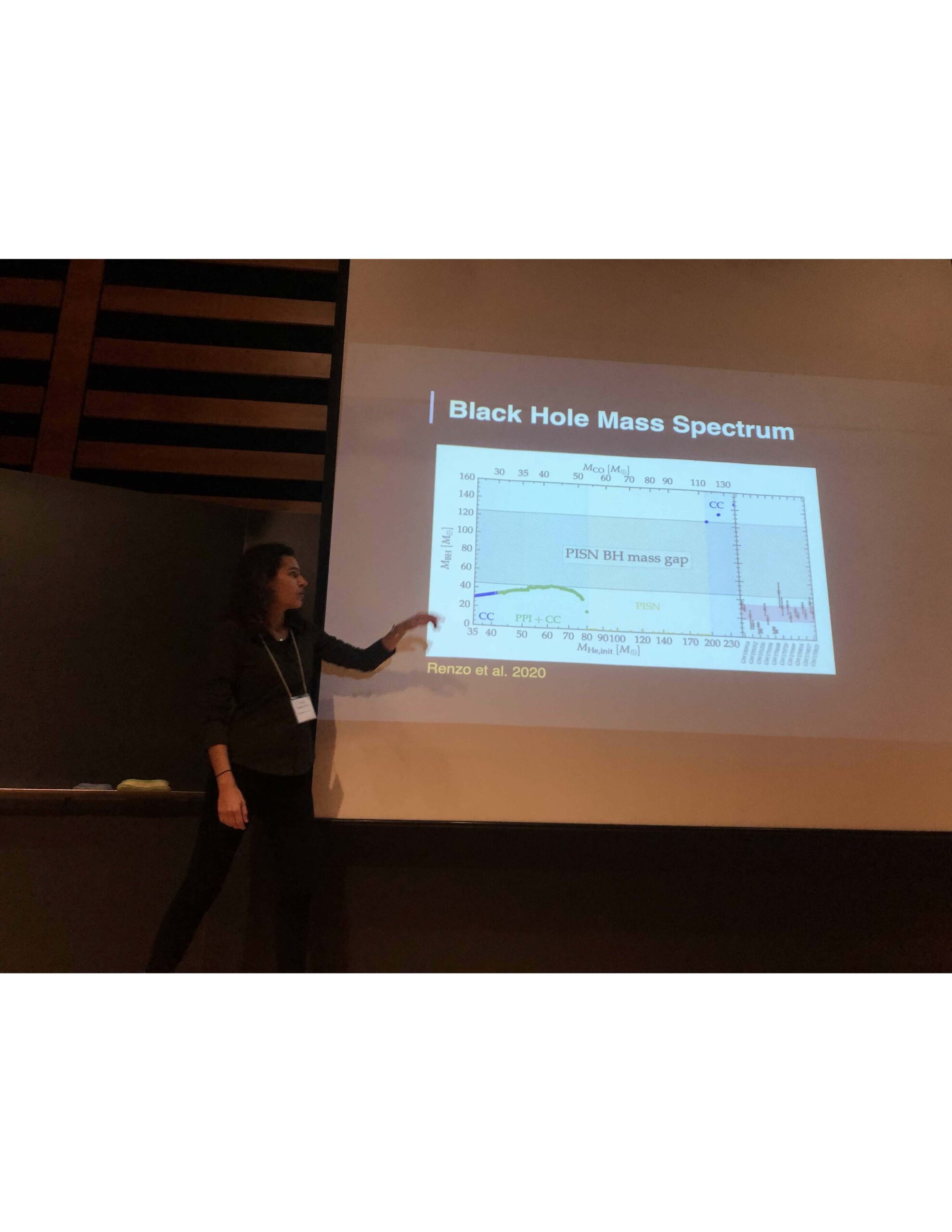 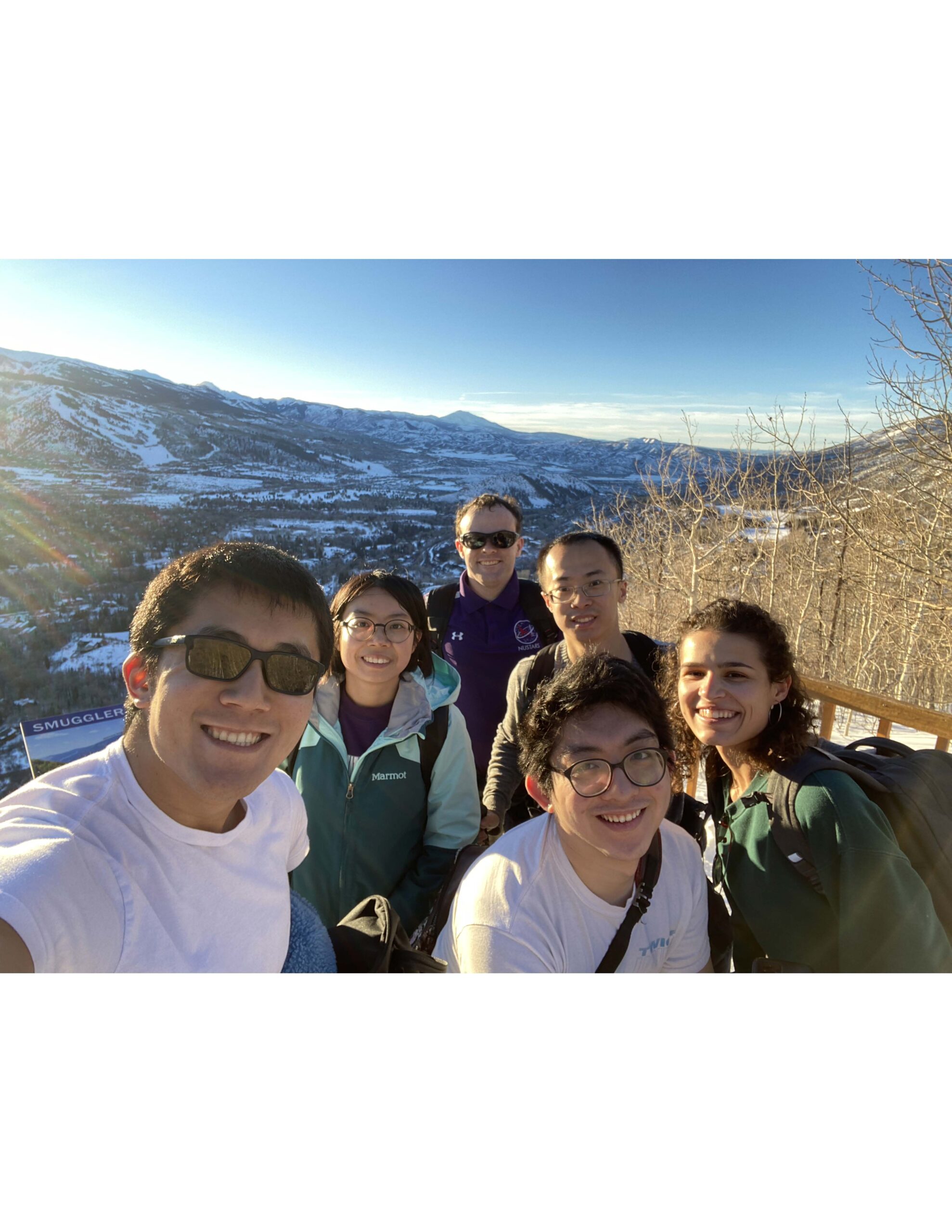 Zoheyr Doctor, the Board of Visitors Research Assistant Professor at CIERA, similarly focuses on black hole formation. “Much of my research up to now has focused on black holes formed in isolated star systems, so delving into the complex environments of star clusters and galactic disks was a great learning experience.” Doctor contributed to a team of international researchers to release the largest gravitational-wave catalog ever assembled this past November.

CIERA graduate student Miguel Martinez has spoken at a few workshops and conferences virtually, but Aspen was his first in-person conference. There, he was able to meet many people in person for the first time and reconnect with people who were previously at Northwestern and moved on to other opportunities.

“I’m glad I got to see Dr. Kyle Kremer, Dr. Michael Zevin, and Prof. Carl Rodriguez, all former Northwestern students with whom I’ve worked over the past couple years. I also got to meet Nicholas Rui, a former Research Experiences for Undergraduates student of Fred’s with whom I never got much chance to speak. It was nice meeting peers from other schools as well.”

Martinez also shared some special highlights from the trip that stood out to him. “I was struck by the uncertainty that currently grips the field. A lot of people said candid thoughts that wouldn’t normally belong in a publication—That alone was worth attending.”

But for Martinez, the biggest highlight “undoubtedly” happened on Thursday night when Carl Rodriguez, a Northwestern alumnus and now professor at Carnegie Mellon University, Sourav Chatterjee, Visiting Scholar at CIERA and Reader at Tata Institute of Fundamental Research, and Fred Rasio, Joseph Cummings Professor of Physics at Northwestern and member of the conference’s organizing committee, won their ‘(P)PISN mass gap’ bet from 2017 versus other members of the community. You can read the bet here. 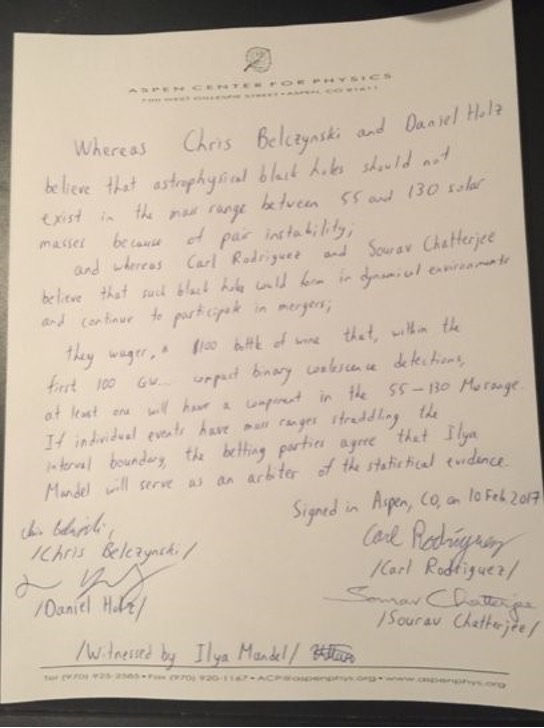 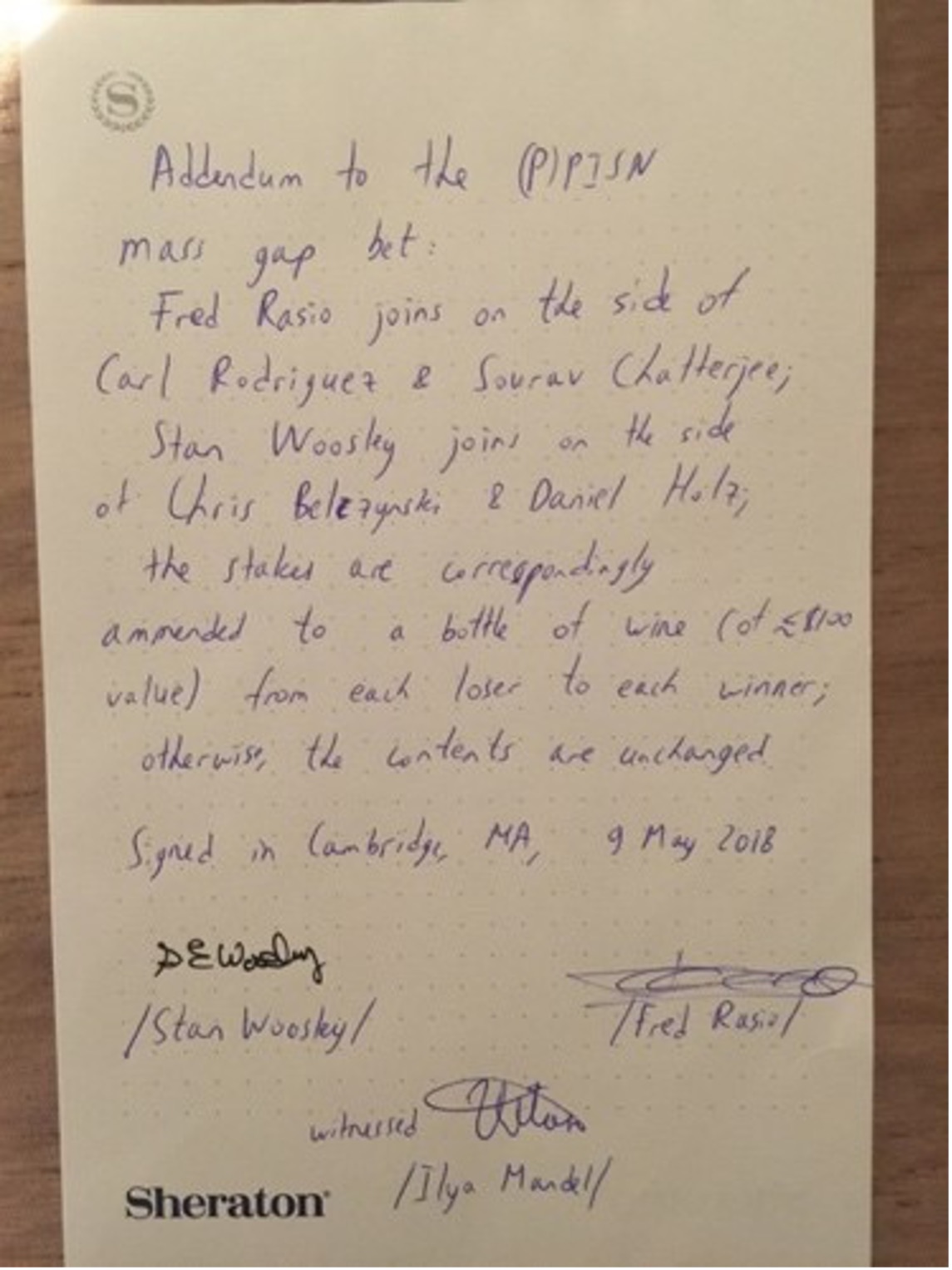 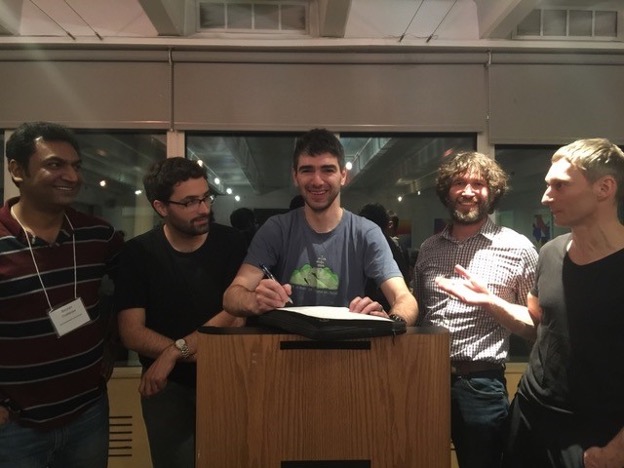 “Whereas Chris Belczynski and Daniel Holz believe that astrophysical black holes should not exist in the mass range between 55 and 130 solar masses because of pair instability; And whereas Carl Rodriguez and Sourav Chatterjee believe that such black holes could form in dynamical environments and continue to participate in mergers;

They wager: $100 bottle of wine that, within the first 100 GW compact binary coalescence detections at least one will have a component in the 55 – 130 solar mass range. If individual events have mass ranges straddling the interval boundary, the betting parties agree that Ilya Mandel will serve as an arbiter of the statistical evidence.”

“Addendum to the (P)PISN mass gap bet: Fred Rasio joins on the side of Carl Rodriguez & Sourav Chatterjee; Stan Woosley joins on the side of Chris Belczynski & Daniel Holz; The stakes are correspondingly amended to a bottle of wine (of ≲ $100 value) from each loser to each winner; otherwise, the contents are unchanged.” 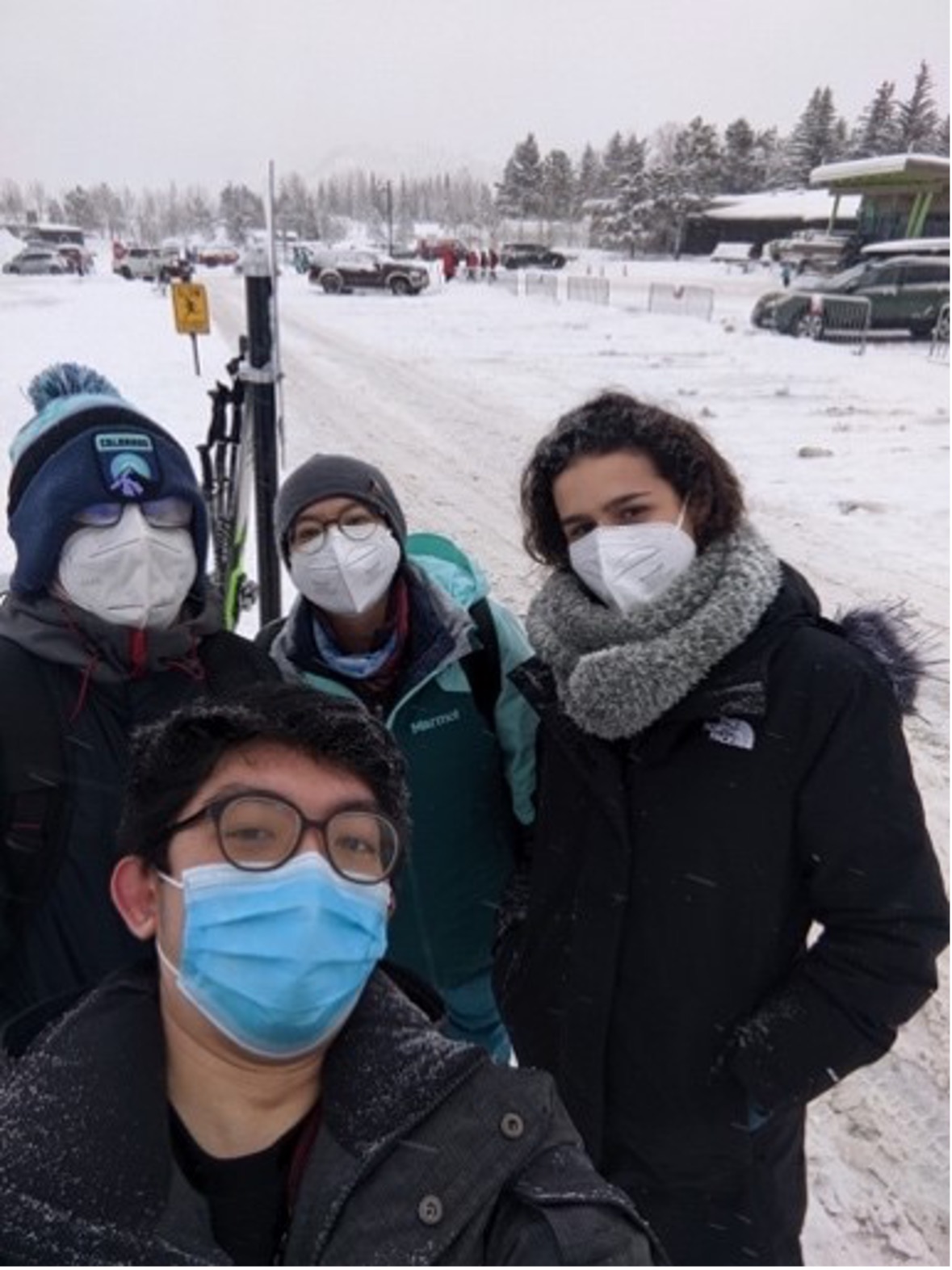 Miguel Martinez and three other grad students of Fred Rasio’s group in attendance waiting for the bus. 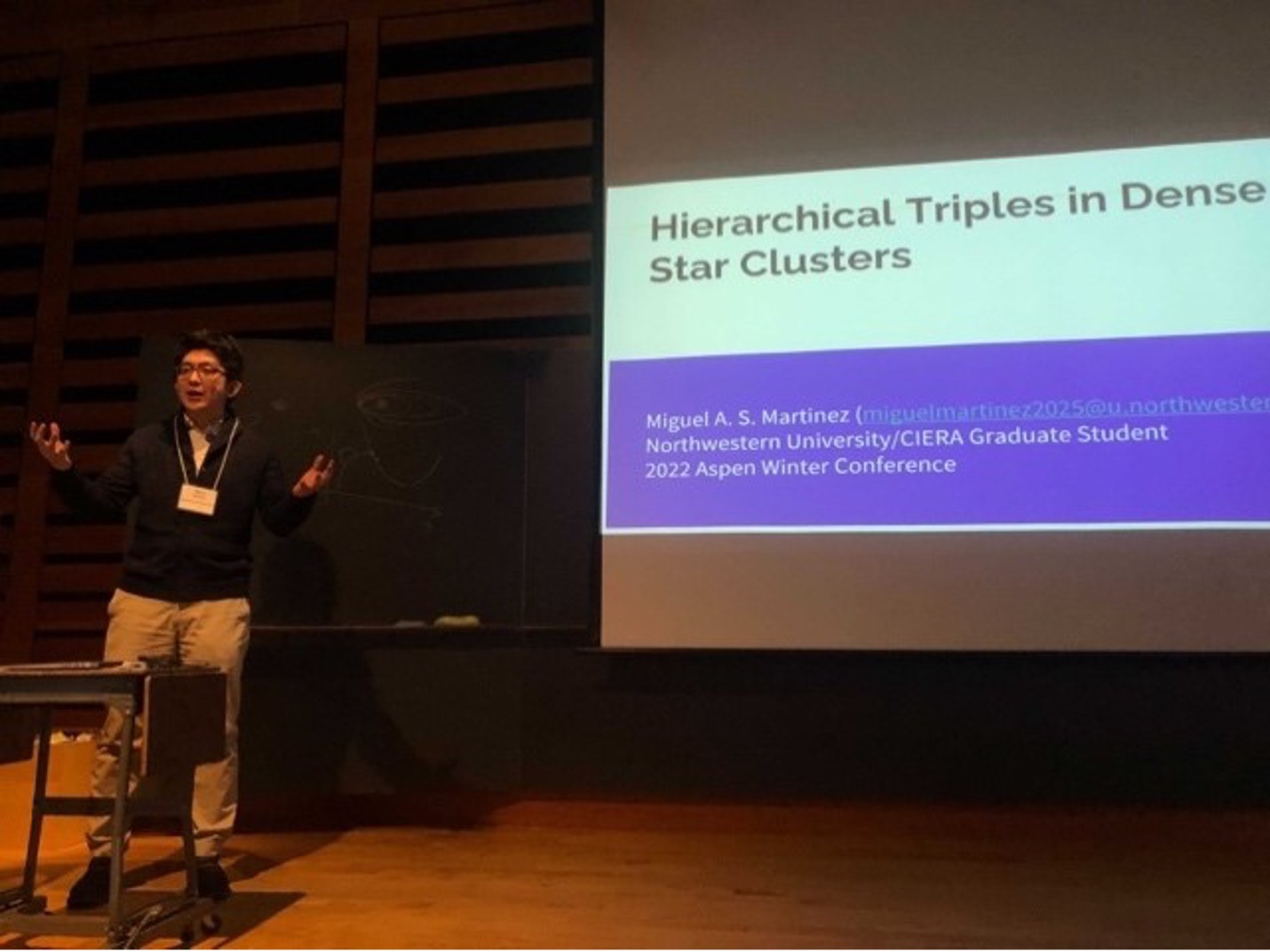 Experiences like the Aspen Winter Conference are important for scientists to build a community that will enable their research to flourish—and for those who may want to wager on research for fine bottles of wine, too!