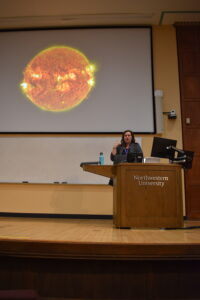 On Friday April 22, CIERA held its first Astronomy Night Out event for Northwestern students and local Evanston residents. The event, attended by 65 people, featured a lecture, “Signals from the Stellar Disco: Decoding the Secret Messages in Starlight”, from CIERA astronomer Emily Leiner followed by interactive astronomy activities with CIERA astronomers.

The lecture, discussing the brightness variations of massive stars, was followed by activities including trivia, spectroscopy, and a window constellations craft. CIERA researchers and staff members were also present to talk about their research and other CIERA events. 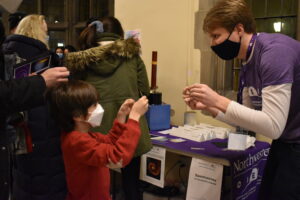 James Schottelkotte (pictured right), CIERA’s Education & Outreach Coordinator and one of the organizers of Astronomy Night Out, called the event a success despite rain cancelling the planned stargazing on Deering Meadow. The attendees had insightful questions and expressed excitement for future CIERA outreach events!

Thanks to everyone who helped make it a great night!